Succes does not take more than doing both tangibles and intangibles in ways others neither conceived nor braved. Failure on the other hand is no different than mastering the art of making excuses why a thing cannot or should not be done. Whether in succeeding or in failing, people have won cupious historical mentions and have been reckoned as famous in their craft and conviction; after all there is no wrong in thinking you can or cannot, save that the former earns you a place with the kings while the latter condemns one to either envy or mediocre roles.

A seat at the throne is never final, people desiring to retain theirs must work twice harder than they did to arrive at the throne as the floors around the king is often adorned with banana peels; a deliberate self-censoring machination to avert overpopulation and ensure it remains an exclusive preserve of deserving minds. This agrees to the aphorism that hard work only elevates while character and integrity sustains the rise.

Ticking the boxes that attest to strength of character, rock solid integrity and people oriented dispositions could not have paid any better, than it has for the Senator representing Akwa Ibom South, Dr. Akon Eyakenyi. These atrributes have answered in numerous ways to why she readily comes to mind when the topic on discourse is leadership, stewardship and delivery, as no one has yet faulted her class act in mandate delivery as well as hospitable and motherly velve that defy age, tribe and social standing.

Our political space does not have too many people in her ilk; who have grown through the ranks, playing vital roles under the three civillian governors Akwa Ibom since the return of democracy has been blessed with. Eyakenyi who had her political baptism with the appointment as Supervisor for Education in Oron Local Government Area, passionately discharged her responsibility so well that one of her colleagues Chief KBE Abia, would attest to how her competence on several fronts led to her becoming a serial representative of the then council chairman late Chief Antigha Bassey at the monthly meetings of council chairmen with the state government.

Then came Obong Victor Attah, who found her deserving of a role as board member in the State Secondary Education Board, Chairman State Technical Schools Board and afterwards appointed Commissioner for Culture, Industry and Tourism before Chief Godswill Akpabio identified her as a capable hand to fill Akwa Ibom State’s ministerial quota, upon which she was appointed Minister of lands, housing and urban renewal by former President Goodluck Jonathan.

On her return from the federal executive council, she braved the brickbat that heralded her appointment as Chairman Governing Council of the Akwa Ibom State Polytechnic Ikot Osurua by Governor Udom Emmanuel. It quite did not take long before she got to work and left naysayers wagging their tongues in disbelief at how much AKWAPOLY could accomplish under her watch. Several months of successful breakthroughs on the job nonetheless paved the way for her arrival on the red chambers of the National Assembly, where she has displayed studied tact and statesmanship in finding solutions to the nation’s numerous challenges.

Most intriguing of her publics service engagements is always having to take over from men, where she seamlessly consolidates her hold and often moves to set new records. Sold out to leaving every environment better than she arrived, the constancy of Eyakenyi’s meteoric rise goes beyond the “what a man can do, a woman can do better” cliché. Behold, mercurial Akon is already in line to succeed another man; all things working according to plan, she will be occupying the state’s number two seat, another first in the series for the Urue Offong/Oruko turned Oron political maverick.

Of a certainty, she has time and again proven her successes beyond fluke, convincing all who care that her progress is a product of well thought out strategy and inherent artistry of service that peps her through tasks and responsibilities others find difficult. These enviable public service achievements must be noted goes beyond gender and sits perfectly on capacity, experience, diligence and tact. Nothing more than stellar performance and the ability to produce result from the faintest of prospects could have seen her stay this long as a key player in various administration, without being consumed in the power game. 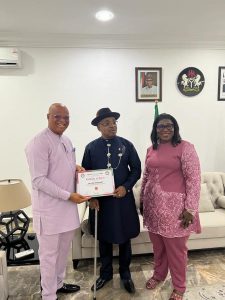 Many may speculate luck, gender balance, credibility or experience as reason for her choice as the PDP Deputy Governorship candidate, leaning on suiting straws and sentiments, while an infinitesimal few could only manage to get envious and bitter, but the truth remains that those who shouldered the responsibility of choosing who would better compliment the Pst. Umo Eno gubernatorial ticket sat through several considerations to arrive at Eyakenyi. Mediocrity and mundane variables could not have made it to that table, and people who know better would rather than query “why always her?” profit by her experience, mien and disposition.

With a proven record of service to consolidate on, note must be taken that she comes to this joint ticket an undisputed highflier who has defied geographical boundaries to write her name in bold gold. As minister of the federal republic, this Dame of the Eyakenyi’s dynasty Completed 3,500 abandoned Housing Projects, constructed more than 5,000 Ministerial Housing Projects, which were officially commissioned in Enugu, Kano and Kaduna. While on that assignment, she developed a framework for conducting National Housing Survey, signed the Concession Agreement for sand filling and development of infrastructure in FESTAC Phase II, unfortunately, Akwa Ibom could only get less than the 1000 units housing project she brought to the state, due to the inability of the state government to provide land.

Braving on to reach more, her voyage at the red chambers of the national assembly has seen to the donation of instructional materials and different educational inputs including exercise books, textbooks, office furnitures, desks, steel cabinets, generators to about 17 schools across the district. She has also committed to rescuing schools infrastructure through the contruction and renovation of numerous Classroom Blocks, Assembly Halls and provision of potable water and sanitation facilities in schools.

More assuring of her favourable disposition to the changing times is her love for entrepreneurship, as expressed in the construction and equipping of Skills Acquisition Centres in Ikot Abasi and Oron LGAs in addition to training and empowerment of hundreds of constituents in various viable skills area, including oil and gas as well as pipeline welding. With the Senatorial mandate she has also built multipurpose Halls in Urue Offong/Oruko and Oron LGAs, as well as award of scholarships to university students.

The Primary Healthcare Centre at Eyotong/Uya Oro, built and equipped with Generating Plant and potable Water stands to her credit, while some Ibeno and Oron communities may not forget her goodwill of acquiring and installing of 500 KVA Transformers to link them to the national grid. In another breath, parents and children beneficiaries of the Early Childhood Care Development Centre built with Clinic and Children’s Play Equipment at Government Primary School, Oti Oro, must be twice lucky to be blessed with an Eyakenyi, not forgetting her sponsorship of several medical outreaches and drugs donation to health centres in 8 LGAs across the district.

These interventions attests to her hands-on experience, a valuable order on the contemporary menu of leadership the people cannot resist, and puts her choice for Deputy Governorship as both informed and well intended. Given the leisure of choice, no political system after seeing the massive acceptance and respect she enjoys across the social spectrums will underestimate the value she brings to the table of leadership. At her worst, people can safely relate with her motherly mien, serene dispositions and patriotic reach, which are no virtues she stumbled on.

When the PDP campaign trail for the 2023 elections arrive our communities and hamlets, it would be as certain to meet people who found the fortune of working with this great gift to humanity admire the beauty and prospects of the Umo Eno gubernatorial ticket. As in her previous outings, being good for all intent and purposes is no seasonal, the people will always find in her a leader who puts them ahead, while adding to the bright colours that define our existence as a people.

Big on getting things to work and making the best of every opportunity, Eyakenyi on the Umo Eno joint ticket will stand tall in heralding a sunny day that would more than bring answers to our myriad of challenges also sustain the warmth and cooperation required to facilitate the steady grinding of the wheels of governance. This is no time for diversionary rhetorics; accepted everyone could not have been Commissioner, Board Chairman, Minister and Senator aplike she has, but everybody had an opportunity to serve humanity, and how much that responsibility was discharged will be roundly tested.

Leadership more like a managerial position is no entry level role, but one that requires a good knowledge of how things work; perception is colourful but reality is the real deal. When push comes to shove empathy, resourcefulness and experience will speak twice before arrogance ever hazards a cough. Akwa Ibom people on this matter more assertively know where they belong and are convinced that old friends are better friends, such that they have enjoyed with Senator (Dr) Akon Eyakenyi, having seen the good times in all graces.