A wise man once said he would spend a third of the time he is allotted to fell a tree sharpening his axe. Whether the tree is felled in the end or not, he must have shown both experience, preparation and capacity at getting the work done. At most he will work away with an air of fulfilment if he is not as ambitious as thinking of the glory in accomplishing the task regardless of cause and effect. In his preparation and setting out with the right tools for the job, he would have engraved his imprint on the rocks as a compatriot who prioritizes preparation.

With experience, preparation and capacity at the core of the conversation about the 2023 elections in Akwa Ibom State comes the possibility of having a handful of people who would be reporting for the party ticking more boxes of mediocrity than those aforementioned. Take nothing for granted in justifying our choices, including prayers, it is time to look above so much in considering what options would better serve our state, conscious that a lot of other Nigerian states will not be sleeping on their choices; which further buttresses the reason we should arrive the Nigerian conversation in the post 2023 elections, advantaged on several fronts.

A cursory look at the political goings-on in our clime has shown more half-prepared politicians jostle for jobs far above their capacities, while a few fit minds are either playing the ostrich or the goodman card of not wanting to be viewed as being ambitious. The half prepared would talk about zoning, compensation and reward for loyalty, while the fit minds have everything working for them including credibility and detailed briefs of what should be their mandates and would do our state a world of good if allowed. The former agreeably would enlist more, the latter is no playground for feable minded folks; this is the category the Speaker of the State House of Assembly, Aniekan Bassey clearly falls.

Earning the trust of not just his people, Aniekan Bassey in navigating our murky political waters which has consumed known saints, has remained resolute and undaunted at getting to work; whenever, wherever and always emerging from the rubble spotless, keeping his calm and shoulders high. It is unheard till this moment that this Akwa Ibom thoroughbred public servant ever considered political correctness ahead of humanity, this is a rare feat that has stood him out and preserved him in the league of very ambitious fellows who would spare nothing at cutting a deal in a harrowingly competitive society like ours, even if it requires enslaving their kith and kin. 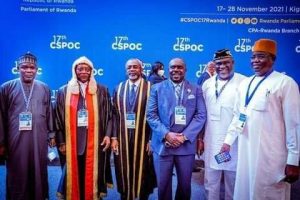 The ability to build longer tables and cross interact with people from various strata of the social construct could only have been possible because of his disarming humility wrapped in zestful stoic and displayed with an irresistable mien that have seen him pierce the ice of very volatile matters without triggering negative outcomes. Whether it be in his native Uruan or in towns he has business interests or on the streets of Akwa Ibom where he holds sway as the number three man, people have found more than a passing conviction that within him lies lot of solutions when viewed from the prism of his results in private and public life.

In the course of leadership at the legislative rung of government, Bassey has shown tact and depth in his ability to galvanize the house as one family, by trouncing divisiveness tendencies which for far too long has remained the bane of progress in this arm of government. With the house doing more than stir needless sensation, Bassey has been forward in building a goodwill that has absolved the seventh assembly of unpatriotic doings and avoidable strives. At close of legislative business for this assembly, it would be unassailable to project that the Aniekan Bassey led house of assembly would not only complete for acclaim as pro-people with past assemblies, but would have left a mark on the national space to be emulated.

On the score of social intervention and human capacity development, not many legislators can display such ingenuity at floating an empowerment programme for young people with the mileage and acclaim of the Rt. Hon. Aniekan Bassey Youth Empowerment Scheme (RHAB-YES) which at last count has been listed as one of the most effective empowerment programmes in our clime. Signposted by a no mean entrepreneur, it would be sane to agree that positioning start-ups and small holding ventures to economic stability is a feat reserved for people in the ilk of a man who has invested about two decades in enterprise development. Through this, Akwa Ibom in a little above two years has seen budding entrepreneurs float fledgling enterprises; a testament to the shoulders Mr. Speaker has graciously continued to offer.

Never doubting his large heartedness, the greatness of his personality has nonetheless transferred the burden of rewarding his ingenuity to the citizenry; he could not have worked so much and still be the one to reward himself. This better explains why everyone aspiring for the next election are already working to strengthen their chances except Aniekan Bassey who would rather wait on the people, in the consciousness that his work must necessarily speak for him. Whether the much he has contributed to make public service serve the people would be rewarded is no conversation for the moment, but the need to emulate other climes where only the best are handed new mandates, would be a laudable idea to attempt.

Unfortunately, despite doing all he has and to the consternation of even people who doubted this much can be done, his unambitious disposition is a thing many still try to come to terms with. He would at all times pass for a “Mr. Easy does it” at such huge loss to the state and people who think he should aspire for more. In his case, apart from queuing behind Governor Udom Emmanuel’s preference of Pastor Umoh Eno in the race for the Hilltop as Deputy National Chairman of the Maintain Peace Movement, there are more benefits the people can draw from getting Aniekan Bassey to consider another rung of leadership at the expiration of his current term at the state assembly.

In reflecting on what deal would be best, the Uyo Senatorial District and Uyo Federal Constituency seats are option that would admit the speaker as most prepared and experienced at the moment when compared to aspirants that have lined out to be considered. If he will accept this calls is a matter of what he really wants for the state and people in opting for a retirement after all the resources and time that have been invested in raising him as a firebrand lawmaker that would do the state and country proud.

The most instructive of these options would be the need to broaden Akwa Ibom’s chance of playing big on the leadership league of either the red or green chambers, where he would from his experience as Speaker in a state assembly be considered for a sensitive committee leadership, to deepen our involvement and visibility in the Nigerian project. Encouraging him in ways than few is pertinent, especially as no serving Akwa Ibom Senator is at the moment contemplating a return, which calls for a more definitive approach in our choices, as we cannot afford the risk of fielding everyone to learn on the job.

However, if he feels indifferent about a senatorial aspiration, the people should do more than grin, but further push to have him take up the mandate of the Uyo Federal Constituency and bring his wealth of knowledge and national reach to the state’s advantage. It must be noted that of all the prospects currently jostling for the green chambers ticket from Uyo, none seems to have the kind of network and nerves Aniekan Bassey has over the years built, especially through his responsibilities as Vice Chairman Conference of Speakers of State Legislatures and frontline member of the inter-parliamentary advisory council, where he is renowned for his numerous contributions to national growth and development.

Contentment as a virtue at a time the people are in dire need of his services can never be celebrated, Aniekan bassey should thirst and hunger for more opportunities as much as the people sustain their preference for his style of leadership and capacity. It is therefore time he considered his joining the race for either the senatorial or federal constituency seat to energize the Akwa Ibom front. In mildly stating the obvious, the people may not further fantasize the resistance he is putting up; 2023 presents yet another opportunity for Akwa Ibom to sell the capacity and experience in Aniekan Bassey to Nigeria.