Alan Rosenthal in a publication on the effectiveness of the legislature queried what state legislature in the 21st century should be; listing effectiveness and the ability to stay above influences that challenge their authorities, by staying true to the fundamental processes of representative democracy and legislative systems as key ingredients of viable legislation. Globally the question of who a good legislator is, has remained largely unanswered as constituencies have their peculiarity, but in establishing a common ground, every representation must first be visible, and for the right reasons.

There probably exists a hall of fame for great legislators, leaving us the option of hazarding a listing of constituencies that have over time been blessed with peopled representation, at least we have evolved to the realization that great feats when repeated becomes a culture. Not quite many parts of Nigeria can boast of legislators who in quick succession take to sustaining the steam, but Nsit Ubium State constituency in Akwa Ibom State comes most handy with the gift of men who sufficiently justify their mandates.

Sticking this convo to the fabric of representation they enjoy from their representatives in the Akwa Ibom State House of Assembly since the return of the fourth republic, no politically savvy mind would forget Rt. Hon. Aniefiok Thompson, Rt. Hon. Dan Akpan and Rt. Hon Onofiok Luke as men who in their time gave Nsit Ubium a permanent front seat in the hallowed chambers of the state legislature; producing a Deputy Speaker and Speaker in the process within twenty of the last twenty-three years. These feats are no passing affirmation that there exists in this constituency a benchmark required of a legislator.

Conscious of the calibre of representatives they paraded in the second to sixth assembly, the seventh could arguably not have been different, except that the people also queued up to rewrite history, when they produced for our clime the first beneficiary of the Muhammadu Buhari administration’s not too young to run, as 25 year old Barr. Otobong Bob in 2019 took over the batons to continue the project of keeping Nsit Ubium on the front burners. This emergence may have been widely heralded as signalling a moment in the sun for young people, but not so much was expected, especially as he at the inauguration of the seventh assembly reported to duty with an age deficit.

Did the difference in age deter his ability to bring his A-game to the basket of legislative engagements? The answer, just like Onofiok Luke who joined the fifth assembly as the youngest would be a resounding No! In about three months shy of three years, this scion of Sen. Effiong Bob dynasty who was Deputy Speaker of the first Akwa Ibom Assembly, has proven that fortune goes beyond having one’s kernels cracked by the gods, to knowing what to make from the kernels. He has sustained the delightsome verve of representation in the area, even to the consternation of the pessimistic lot, who could have counted his age as a disadvantage.

Think him as one who rode on the father’s back to his sunny day and you would not be making any mistake, until you attribute his achievements and sterling performance in public service to the old block, then you would have to explain why other hundredths of kids from politically exposed backgrounds are yet to hazard anything worth writing about. In discussing his hold and reach, Otobong Bob must be commended for daring to be different and allowing his age count for the state on several positive scores, conscious that people far older than him are still neck-deep in exuberant tendencies. He has done the younger generation proud to be acknowledged as an ambassador of sort, who despite landing the fortune of being in the limelight, has carefully managed himself to stay above scandals and vices prevalent among his peers.

Getting to superintend the over the house committee on business, rules and ethics was quite instructive of the fact that the leadership of the seventh assembly understood capacity when one came by. From his engagement on that beat, one can safely agree that he belongs to an order that is concerned with institutional integrity, which he has covertly and overtly signposted in his dealings as the starboy of the seventh Akwa Ibom Assembly, considering the calibre of men who have sat on committees of such coordinate functions in legislative houses in our clime.

With sponsorship of four startegic bills, including the bill for a law to establish the Akwa Ibom State Security Trust Fund, a bill for a law to provide for the preservation, protection and restoration of historical properties and cultural heritage sites in Akwa Ibom State, the bill for a law to establish Akwa Ibom State office of the public defender and a bill to regulate rights and obligations under tenancy and the relationship between the landlord and tenant, including procedure for the recovery of premises and for connected purposes, Bob has also co-sponsored about twenty-two bills in addition to moving five sensitive motions, such as the one that sought to stem the tide of quackery in the Akwa Ibom health sector. 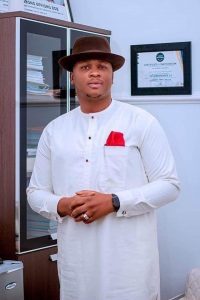 The energy that saw him crisscross the over eighty polling units prior to the 2019 polls was not lost on the electioneering, in giving his people value for their votes, Bob has been adequately reaching out through renovation of school blocks, acquisition of school desks, water projects in Ikot Akpan Abia Ubium, Ikot Ekpene Udo and Nung Obong, as well as numerous social interventions like employment, empowerment and support to constituents for healthcare, education and businesses, not forgetting that he stepped in as an emergency stop gap for his people in the dark days of covid-19 scourge, through sensitization, provision of none pharmaceutical preventive gears and the activation of an emergency team to coordinate incidence response.

As he looks to completing his current legislative outing, Bob in a recent media interaction said he is committed to pursuing ideas and programmes that will see to the strategic empowerment of his people, support the proactive bid to provide legislative backing to the flagship AkwaGIS programme of the state government through a bill for a law to regulate land administration, Akwa Ibom State geographic information services and other matters connected thereto, which is in the works. He again at that interaction committed to supporting the Aniekan Bassey leadership of the seventh assembly in furtherance of their caste at giving the state and her people leadership that is inclusive and result-oriented.

In tune with Henry Wadsworth, who posited that “the height by great men were not attained by sudden flight, but they, while their companions slept were toiling upward in the night.” Otobong Bob, an alumnus of Brooke House College, University of Buckingham and University of Warwick, all in the United Kingdom as well as the Nigerian Law school, knew a future was underway when diligence and assertion would be the legal tender, as he surrendered to the mentorship of Alex Izinyon, SAN and Obla SAN to scoop every knowledge his passion for service required. Today he is not only ticking the right boxes but is unrelenting at etching his name on the hearts of time and people.

He may not be an everyday street baller, but he is well built with features that allow him freely interact with people across all of life’s social spectrum; this finds expression in the massive acceptance that greeted his recent elevation as the Nsit Ubium Local Government Coordinator of what currently passes for one of Akwa Ibom’s biggest political movement, the Maintain Peace Movement. Going by the goodwill he enjoys and the structural bent of Nsit Ubium politics, the possibility of staying beyond 2023 in the state legislature is as good as done, and this for his constituents and league of young people across the State holds a tremendous promise that better days are here.

Conclusively, continuing in the grace and might that have seen him walk shoulder high in public service, the quest for replacement of some ageing options with energetic and contemporary leadership alternatives has never found more emphasizes than mirroring the gains of what the younger Bob has brought to the table of leadership. Intrinsically, it is unassailable that with Otobong Bob lies greater possibilities for more young people to be admitted to leadership roles upon which the trajectory of development in our clime would be realigned to meet the yearnings of the present century, while drawing lessons from the past. Of the truth, a generation in recent times has not been better pioneered.