Until the turn of the current decade, what sports meant to an average Akwa Ibom person remained a subject of their obsession and amity to sporting personalities, most of which were rarely indigenes of the state. There were neither facilities nor clear policy aimed at promoting whatever was left of the peoples’ enthusiasm, save for the few times government tried promoting some indigenous bright spirits; whose wins were either short-lived as was the case with Samuel Peter or barely visible as with Vincent Enyeama. We all celebrated their successes but did very little at handing them staying power. We never could have dived so low if we ever dared a scratch of the effort invested in the six years of the Udom Emmanuel administration through the Commissioner for Youth and Sports, Sir Monday Uko in winning and sustaining sporting acclaim for the state.

By the end of 2015, with Governor Emmanuel barely doing six months in the saddle, Akwa Ibom through Akwa United emerged from the blues to clinch the oldest football trophy in Nigeria,the FA cup, at a time the club was thought to have been in tatters following the resignation of Obong Isong Isang who had Akparawa Nse Ube step in his shoes, and later to be succeeded by Paul Bassey. It took Sir Uko’s comeliness for Bassey to get on with winning the second title and subsequently build a relegation struggling team to one that is on its way to securing continental honours after having won the Nigerian Professional Football League for a historical first in over 25 years, pulling off a near twenty games unbeaten run.

These has in no way been a walk in the park, but a product of zestful commitment to changing the narratives and getting things on their feet. These three trophies over the last six years are visible fruits of the well intentioned drive to building in Akwa Ibom a haven of sports development. Atop the proposed sporting centers in each of the ten federal constituencies of the state, a new stadium in Eket and several schools and youth sport meet, sits a doyen, desirous of fulfilling our sporting development dream; Sir Monday Uko, a.k.a Monty.

The testament of Akwa Ibom’s ascendancy on the rungs of Nigeria’s sporting ladder could never have happened as a volcano, be it for the pride of an alluring aesthetics or the diligence of a workable plan, every spanner put to work began with the determination of delivering on a mandate. How Chief Godswill Akpabio as Governor between 2007 to 2015 considered and completed what is today famed as Nigeria’s most beautiful stadium, the Godswill Akpabio International Stadium, could either pass for thoughtfulness or an attempt to boost aesthetics, as the state at the time made very little positives in regional sports. This shocking wins explain the “How did you do it” exclamation from Akpabio, the then Minority Leader of the Nigeria Senate made in commending Governor Udom Emmanuel, when the state recorded the second consecutive FA cup victory in 2017.

Known for recreational initiatives, stoic administrative acumen and mobilization capacity, Monday Uko of the Monty hospitality chain has called the shots in all of the state’s sunny moments in sports and remains so till date with viable promises of expanding the frontier. Arguably quite an unknown name in the field of sports prior to his appointment, Monty has since championed Akwa Ibom’s most productive strides in sports development to write his name in gold as one of the best sport administrators Nigeria has produced. It definitely takes being a team player to be able to aggregate such result, which began with the round leather game and as of last count has spanned other fields of sport, with notable and palpable testimonies. 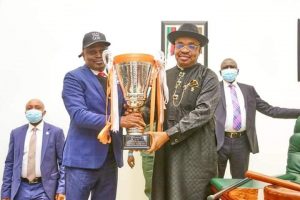 You would have Monday Uko’s penchant for healthy collaboration to thank for Akwa Ibom’s gift of Aniekeme Alphonsus to the global athletic space having stunned the world in July 2017 at the all Nigeria Track and Field Championship where she won the 100m senior title before representing Nigeria at the 2017 IAAF world championship in London. These achievements of Aniekeme have become a rallying point for Governor Emmanuel’s Dakkada initiative that preaches possibility for the right passion. Beyond Aniekeme Alphonsus, Monday Uko has championed a sporting space that can thankfully look back to the advent of Imaobong Nse Uko who competed in the 2020 Summer Olympics, while Okon-George in Monday Uko’s hand has become a factor to reckon with in national sports. Whether it is in Abuja 2018, Edo 2020, or the expected 2022 sport festival, to be hosted by Delta state, Akwa Ibom’s Orange flag is sure to secure prominence with Monty in the sport saddle.

Beyond these intentional efforts at developing grassroots sport to see the dream of making Akwa Ibom a sporting nursery for talents export, Monty has been deliberate at ensuring the state is never eased out of sporting conversations and has achieved a lot more by galvanizing industry stakeholders to shore up productivity. In building these partnerships it has become regular to find him sit away from the toga of a Chief Executive, expanding access and conversation beyond politics. With him, there is no undue self-estimation, he can lend a hand to support the technical crews and when needed can also recline to be a cheer leader and sometimes a logistics staff, just to see sports work. It sure would take so much to push aside the strategic support he lends the sporting world; even if we tried to, members of the Sports Writers Association of Nigeria (SWAN) in the state would think differently by not forgetting how he came through for them in the heat of COVID19 pandemic with support that boosted their economies, same way a sporting talent, David Etuk aka Injection and family would always remember how his medical bills were taken over by Monday Uko at the National Hospital, Abuja, when ill health took its toll.

Tales of how the state grew from floating a staggering one club in the professional league to having Akwa United FC and Dakkadda FC perform so brilliantly in the nation’s topflight league NPFL, with Ibom Youth FC and FC One Rocket in the Nigeria National League is a magic only Monty can explain. It is even more electrifying that Akwa United in the same lifetime it was thought sterile and unproductive could be parading bright football minds for the Nigerian super eagles, as well as some highly priced footballers for global export. With the swift twist of fate, it has become fashionable to find families that are now favourably disposed to having their children take to sports as a means of livelihood, a departure from the hitherto unattractive fortune that saw us trail other climes in the discovery of sporting talents. 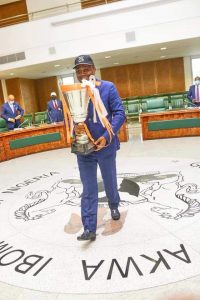 When the stadium in Eket is delivered and the remodelling of the Uyo township stadium completed, just then we would without fail come to appreciate the light in Monday Uko’s legendary hold on our sporting turf, even as the topnotch management of the Godswill Akpabio Stadium would remain a masterstroke when discussing his ingenuity. Not withstanding his strides, the feat sports has attained in Akwa Ibom State under his watch would amount to naught if people are not actively under-studying his imprints with a view to applying his sportsman disposition in areas other than sports. The result and temperance he has brought to bear should also find expression in leadership, administration, patriotism and politics, if Monty must count for us a blessing.

Like in our sporting life which has grown in geometric leap, it is sane and safe to wish that Monty happens in every other aspect of our existence as a people, so in the end we not only walk tall with badges of honour we earned but walk fulfilled that those badges brought smiles to faces and joy to the hearts of even those who doubted our capabilities. As a people, I hope we find reasons than few to sustain the Monday Uko’s legacy and internalize the conviction that when the passion is right, nothing is impossible.

Be like Monty, dare to succeed against all odds even when all indices point southwards. Of the truth, nothing more than passion and determination can guide a journey this far; cheers to Akwa Ibom’s maverick of sports administration; Sir Monday Uko. 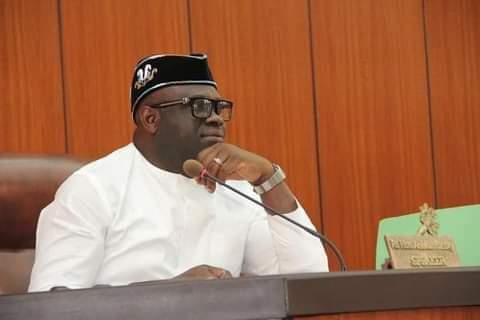 ANIEKAN BASSEY: THE SCORECARD OF AN EVOLVING NORTHERN STAR 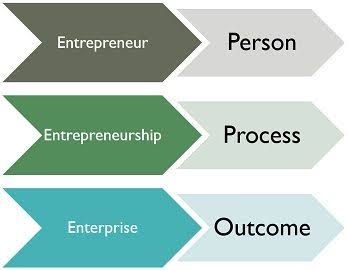 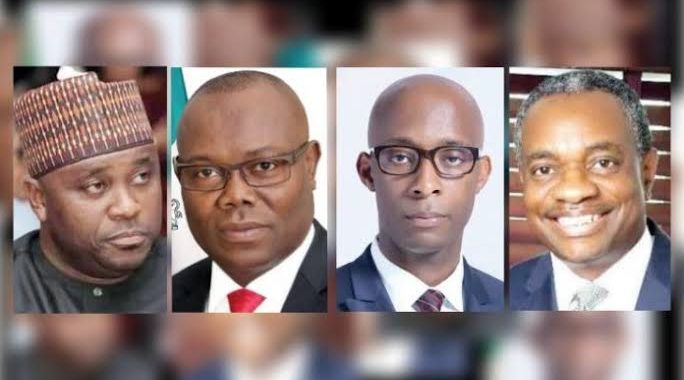 A’IBOM 2023: THE QUEST FOR AN ACCEPTABLE GOALPOST