IBOM ICON Hotel & Golf Resort recently rewarded some of its staff who have distinguished themselves during its recently held monthly award for excellence thereby inspiring them to do more.

The award, which recognized the three most outstanding employees and the best department, was presented at the hotel auditorium, with the goal of thanking employees for their dedication to the company’s growth and development.

Apostle Andy Nyeneime, the Lead Pastor of Holy Ghost Ambassador Ministries, presented the workers with a reward consisting of cash awards and certificates commending them for their exceptional contribution to the hotel.

While delivering the prizes, Apostle Andy Nyeneime stated, “The height that great men achieve was not attained by sudden flight but by toiling while other men slept.” He also stated that people should be honoured while they are alive, rather than after they have died.

The Icon Gold Star Award winner Gloria Enobong Ekpeyong was presented a certificate of excellence, Fifty thousand Naira cash prize and with her portrait hung within the hotel lobby for a month as a firm recognition of her commitment to the hotel. 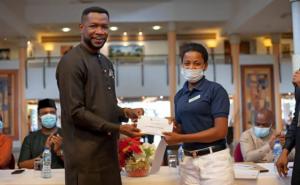 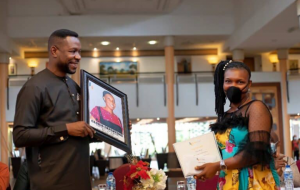 In his congratulatory remarks, Mr. Akan Bassey, the Head of Human Resources, exhorted others to emulate and explore available potentials, particularly for personal development, and to be effective ambassadors for both the firm and themselves.