UNRAVELLING SOME TISSUES OF LIES (2): WHY ORO LOST THE 2015 AKS GOVERNORSHIP
By Professor Okon Eminue

Before examining why Oro Governorship 2015 failed, I consider it pertinent, by way of an introduction, to very briefly itemize the various efforts we made to ensure the Success of the Project. When we commenced the struggle for Oro Governorship 2015, we identified three stages or phases of the Struggle the Phases of Consultation, Consolidation and Confirmation.

During the Consultation phase, every segment of Akwa Ibom State, Nigeria and the Diaspora was made to be aware and understand Oro’s Case. Effective 3rd May 2013 Oro Think Tank initiated Consultation with the major ethnic groups in the State had commenced in earnest:
• Annang, as represented by Itai Afe Annang-in-Council; • Ekid people as represented by Ekid Peoples Union• Our Obolo kindred of Ibeno and Eastern Obolo;• The Ibibio through the Ntison Ibibio-in-Council;• Public Presentation of WHY ORO.• Official Presentation of the publications to Governor Godswill Akpabio• A Myriad of Official Discussions with Governor Akpabio (26 Times)• Consultation with Power Centres Nation-wide;• Private presentations to Critical PDP Stakeholders;• Presentations to Foreign Embassies• Briefing of Oron Union Members in Diaspora.

So much intellectual inputs went into our preparation for Oro 2015 Governorsahip that after our public presentation of AKWA IBOM GOVERNORSHIP 2015: WHY ORO, not only did Governor Godswill Akpabio assert that it must have taken Oro Think Tank at least 3 years to put the publication which he considered a compendium together. Altogether three publications were produced by Oro Think Tank  (OTT) in furtherance of Oro 2015 Governorship Project:
1. GOVERNANCE IN AKWA IBOM STATE, 2007 – 2011: THE ORO EXPERIENCE.
2. AKWA IBOM STATE GOVERNORSHIP 2015: WHY ORO?
3. 20 REASONS FOR AKWA IBOM STATE GOVERNOR OF ORO EXTRACTION IN 2015.
These were in addition to several press conferences in Uyo, Lagos and Abuja as well as media interviews and commissioned feature publications in newspapers aimed at drumming support for Oro’s Governorship bid in 2015.

After the presentation of the same document before the Ntisong-in-Council, the Ntisong Ibibio 111, HRH Obong Ekidem, commented that “if the issues of governance of Akwa Ibom State that formed the subject matter of Oro presentation were given as an examination, many would not have scored a pass mark.” Oro Think Tank had consulted comprehensively in the State, in Nigeria and in the Diaspora. It must be stated unequivocally that whoever those  who had occupied Governorship position in Akwa Ibom State had consulted which amounted to a boon and a success to their endeavor, we have equally consulted with all such dignitaries, institutions and centres, keenly aware of the fact that, ultimately,  their inputs will count in the final reckoning.On 26 occasions, we met with Governor Godswill Akpabio and in four specific occasions, he gave us his word which we thought we could take to the Bank. There was no time he stopped pledging to hand over to an Oro indigene, until the very last moment.

The composition of each delegation comprised Members of COTR, Oron Union, OTT, Youths (Essu Nlap Oro);  and Women
In the Second Phase: Consolidation – featured identification of prominent individuals in the groups already consulted.

During the Phase of Confirmation, the 2015 Oro Governorship Steering Committee acknowledging that 57 Aspirants had emerged in Ikot Ekpene Senatorial District during the 2006 Governorship Election, considered that 8 aspirants from Oro Nation were not too many and that “the more the number of Aspirants, the merrier”: The 8 Aspirants were Barr. Asukwo A Okpo; Barr Ekpenyong Ntekim; Barr Effiong Abia, Larry Esin, Mr Effiong Usin, Professor Peter Esuh, Rt. Hon. Jerome Isangedighi, and Crown-Prince Chris Abasi Eyo.
1. LACK OF CONSULTATION & ABSENCE OF AGREEMENT As State Chairman of the PDP, Arc. Otu Ita Toyo  had a Kitchen Cabinet/Advisory Council, an ad hoc arrangement that usually identified teething Oro problems, discussed issues and threw up suggestions and policy recommendations for actions. This ad hoc Advisory Council comprised Ikpoto Okon Osung, Professor Okon Eminue, Dr Efiong Edunam and Asuquo Uwe Oboho. It is noteworthy to recall that a Memo drafted for presentation by Total Chair at the  first National Executive Committee Meeting of the PDP on How to reform the PDP for greater effectiveness and acceptability had reportedly received a standing ovation.

The Advisory Council, having demonstrated its utility and relevance, one would have expected once Arc. Otu Ita Toyo, as State PDP Chairman, decided that Godswill Akpabio was his choice Candidate for the Governorship of Akwa Ibom State, he should discuss the matter with the OTT and the Advisory Council that had, at least once,  proved its relevance. That, he never did.

As State PDP Chairman, Total Chair handled the emergence of Godswill Akpabio as PDP Governorship Candidate all alone, for whatever reason. He went on his own frolic and fraternized with and allowed Godswill to emerge without any advisory input or any Agreement  (Community Agreement) – the type other politicians strike as a platform for galvanizing, mobilizing and harnessing political support for their chosen political objectives or Candidature. Such Agreements usually feature negotiated terms and conditions, duties, obligations and responsibilities as well as privileges, concessions and horse-trading by the parties.

The point being made here is that Oro Nation, the proverbial third leg of the Tripod in Akwa Ibom State, started failing as a people (as ekwe) the moment Otu went on his own frolic, all alone, like a pelican in the desert, to foist and deliver Godswill Akpabio, roughshod and against even the wishes of his State Party EXCO. Such a person who had utilitarian advisory structures manned by ideas men in place but decided to operate unilaterally must have had some personal agenda.  That was why he did not want to carry Resource Persons along with him, lest such Resource Persons, even in advisory capacity come to know about his personal agenda and the extent to which it conflicted with or contradicted societal goals and imperatives.

LACK OF AGREEMENT
It must be noted that lack of Agreement in 2006 was the bane of Oro in the 2015 Governorship struggle. It is also common knowledge that Political Agreements are very powerful instruments for eliciting commitments and galvanizing support for political action. It may seem trite, but it is important to emphasize that Governor Godswill Akpabio, who prides himself as a Promise-Keeper, is known to have honoured the terms of all the agreements, written and unwritten, that he entered into with communities and groups in the State. That was good luck for communities who entered into such Agreement. The question Oron Nation is asking today is: Where is the Agreement our entered into when he single-handedly gave the PDP  Governorship Ticket to Chief Godswill Akpabio in 2006?

For instance, an Agreement could have a Clause which states that if Oro Nation could electorally support a Governorship Candidate from outside Oro Nation, by   “ensuring that majority of the lawful votes in the Governorship  election from Oro Nation is cast for such a Governorship Candidate/his Party, the benefits Oro Nation would derive include the following: “ …mobilizing for the implementation of zoning/rotation/power shift as it pertains to the Governorship slot in Akwa Ibom State, not on the basis of Senatorial District but on the basis of dividing the State into two Groups comprising the major ethnic Group on the one hand, and minority ethnic nationalities on the other, and rotating or alternating power (or Governorship seat) between the two Groups after every eight (8) years …”; righting of any injustice suffered by the Community in the past.
2. GOVERNOR’S CAUCUS One of the reasons Oro did not attain its rightful place in the scheme of things was absence of Governor’s Caucus comprising critical Stakeholders that brought the Government to power. For instance, under Governor (Obong) Victor Attah, the Governor’s Caucus comprised the key politicians who brought the Government to power, namely:
General Edet Akpan (rtd) (Caucus Chairman); Dr Efiong Edunam…………………….Member Obonganwan Rita Akpan…………….Member Chief F.E.J Etim……………………….Member Obong Otu Roberts……………….      Member Ikpoto Okon Osung……………………Secretary
Every important issue was discussed and a decision taken by the Caucus. However, under Governor Godswill Akpabio, Arc Otu Ita Toyo neglected  or failed to put in place the Governor’s Caucus which he was eminently qualified to create, not so much as the State’s Party Chairman but as one who single-handedly gave the Governorship ticket to and therefore installed the Governor in office, so to say. It was Total Chair that created the void that eventually disadvantaged Oro Nation by not utilizing his vantage position to put the Governor’s Caucus in place. In the absence of a Governor’s Caucus, put in place by critical Stakeholders who brought the Government into being, the field was left bare for Governor Akpabio’s brothers – Sir Emem, Barr. Ibanga, Prince and Nsentip Akpabio, etc – to take over both as Advisers and Inner Caucus Members to the Governor, since nature abhors or does not tolerate any vacuum.
3. TOTAL CHAIR’S REJECTION OF OFFICE OF SSG
Regardless of the number, weight and variety of excuses and notwithstanding his grandstanding on the matter, Total Chair’s greatest and most devastating blow to Oro Governorship 2015 Project  was his ill-advised rejection of the position of Secretary to the State Government (SSG) that Governor Godswill Akpabio offered him on a platter. It was the greatest undoing for Oro and “the unkindest cut of all” which defies all logic, semantics and rationalization. Every argument he advances as justification for that odious act against his Fatherland sounds like circumlocution. 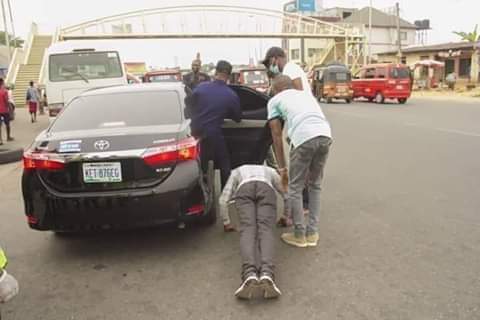